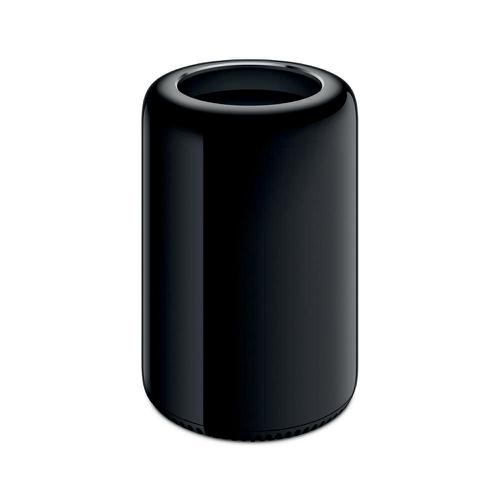 Mac has always been built around a singular vision: to create machines that are as powerful and functional as they are beautiful and intuitive. Mac Pro is a stunning realisation of that ideal. All the elements that define a pro computer — graphics, storage, expansion, processing power and memory — have been rethought and re-engineered. So you have the power and performance to bring your biggest ideas to life. Engineered around workstation graphics with dual GPUs, PCIe-based SSD storage, high-performance Thunderbolt 2, Xeon processors, fast memory and support for 4K video, Mac Pro delivers brilliant performance across the board. Mac Pro is muscle through and through, starting with the Intel Xeon E5, available with 6, 8 or 12 cores of processing power on a single die. And with up to 30MB of L3 cache, 40 GB/s of PCI Express gen 3 bandwidth and 256-bit-wide floating-point instructions, you’ll never be at a loss for speed. Every component in Mac Pro is optimised for performance. That includes a four-channel DDR3 memory controller running at 1866MHz. It supports up to 64GB of memory and delivers up to 60 GB/s of memory bandwidth, which means you can fly through even the most computer-intensive tasks in no time. And since it’s ECC memory, your render job, video export or simulation won’t be stopped by transient memory errors. Graphics Not only does it feature an AMD FirePro workstation-class GPU — it features two of them. And each is available with up to 6GB of dedicated VRAM with up to 2,048 stream processors. With all that power, you’ll be able to do things like seamlessly edit full-resolution 4K video while simultaneously rendering effects in the background — and still have enough power to connect up to three high-resolution 5K displays An incredible amount of innovation went into designing a fan system capable of cooling such a high-performance device. Instead of adding extra fans, we engineered a single, larger fan that pulls air upwards through a bottom intake. As air passes vertically through the centre of the device, it absorbs heat and carries it out of the top. Expansion Designed with built-in Thunderbolt 2, USB 3, Gigabit Ethernet and HDMI 1.4 ports, Mac Pro has everything you need to build a workstation completely customised to what you need and how you work.

Consumer Delivery Expectation: Order fulfilment will take between 2 and 3 days and is subject to stock availability. Product is non-returnable